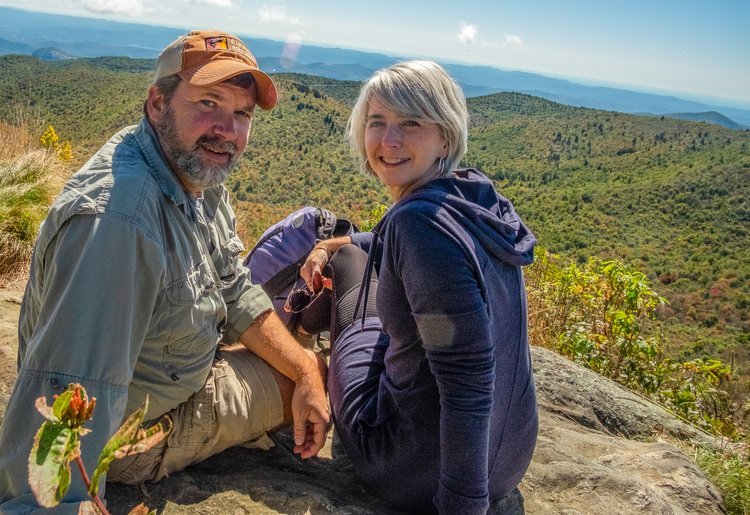 When you reach the community of Hemp, turn onto Sparks Road and then take a right to Squirrel Hunting Rd.  In the curves watch for the signs that warn of the big slow dog that might be sunning itself in the road.  After about another mile you will reach God’s provision.  It’s a small cabin on the side of a mountain for which we are so, so thankful.

The story of Gideon has always been one of my favorites.  Here is a man of faith who needs constant reminders that God is really, really His protector and provider and the provision for His people.  Gideon is a hesitant leader who needs constant confirmation.  If you know the story, you know that Gideon was faced with a daunting prospect that became more and more daunting.  The Midianites and Amelikites were a huge, oppressive threat against Israel.  You would think that God would bring confirmation to Gideon by strengthening his army, fortifying them through allies, giving them greater weaponry - something big and ominous.  Rather, God stripped Gideon of all self-strength.  God took away 22,000 of Gideon’s 32,000 men leaving 10,000.  But He didn’t stop there.  At the end of the day, God stripped Gideon’s strength down to 300 men.  Three hundred men against “the Midianites and the Amalekites and all the people of the East [who] lay along the valley like locusts in abundance, and their camels were without number, as the sand that is on the seashore in abundance.”  It gets worse.  They were to go into battle with a trumpet in one hand and a lantern in the other.  No sword. No spear.  No cannon or tank or drone drop.  That’s just insane.

Like Gideon, it has felt like all odds have been against Holly and I finding a house in North Georgia.  One person literally laughed when we told them our price range.  Two recommended realtors handed us off to their colleagues. A couple of other realtors just dropped all communication after promises of “we’ll find your dream home.”  We toured every house in our price range in a wide region and they were all either major fixer uppers (no ceilings, major leaks, abandoned) or difficult locations.  We were not looking for our dream home, just a house we could move into and feel somewhat good about it.  To add to the weight, we had a time limit.  A couple graciously pulled their Airbnb off the rental market during their slow months of January and February and reduced the rate for us.  That rental would end March 4.  We moved into the rental January 4 and we visited our first homes the next day.  With closings to take 30 days or more, we were very time-limited.

Prior to Gideon going into battle, the Lord had called him to the task.  I love how the Lord describes the trembling Gideon and to what He calls him:

And the angel of the LORD appeared to him and said to him, "The LORD is with you, O mighty man of valor." And Gideon said to him, "Please, sir, if the LORD is with us, why then has all this happened to us? And where are all his wonderful deeds that our fathers recounted to us, saying, 'Did not the LORD bring us up from Egypt?' But now the LORD has forsaken us and given us into the hand of Midian" (Judges 6:12-13).

Lord, why would you confirm again and again our call to southern Appalachia and then just drop us like so many realtors?   Was this calling a cruel trick?  Are the names of Beloved, Covenant child, or child of the King just vain designations?  Am I not justified for having these two o’clock a.m. panic attacks?

And he divided the 300 men into three companies and put trumpets into the hands of all of them and empty jars, with torches inside the jars. And he said to them, "Look at me, and do likewise. When I come to the outskirts of the camp, do as I do. When I blow the trumpet, I and all who are with me, then blow the trumpets also on every side of all the camp and shout, 'For the LORD and for Gideon.’” (Judges 7:16-18).

When they blew the 300 trumpets, the LORD set every man's sword against his comrade and against all the army. And the army fled as far as Beth-shittah toward Zererah, as far as the border of Abel-meholah, by Tabbath (Judges 7:22).

We are people of valor only when our faith is in the Man of Valor . . .  even when our faith is pathetic.  We move forward trembling, needing confirmation and affirmation, and with a questioning heart, yet in trust in a Savior who has made great promises to the people for whom He has entered into an inviolable contract.  “Are You faithful even in this?”

I was scrolling Facebook Marketplace perusing odd things that interest me like jet ski trailers (kayakers will understand), reverse flow smokers, and trout fishing vests when a home popped up For Sale by Owner.  It was a small cabin in our price range and in a terrific location.  I messaged the seller.  Holly and I drove to see it, made an offer, and signed a contract.  A few moments later the seller had a cash offer for 20,000 over asking price.  "The LORD is with you, O (anxious-hearted, fearful, doubting) mighty man of valor.”

We close on March 3.  Just in the nick of time.

I cannot express enough how thankful we are to the many, many people who partnered with us in prayer, advice, and contacts over the last month.  I can only imagine the delight the Lord received as He heard His children petitioning on behalf of other longing children.  The thought of a heavenly Father who delights to surprise his kids with His timely provisions is astounding.  Jesus, God’s Son, is the true Man of Valor who brings us into the Father’s care through His own death on the cross and victory through resurrection. With such sacrifice, why wouldn’t He also care about the little things His people need?

Subscribe to receive email updates with the latest news.